Joining us in September? Read our 2021 Welcome Newsletter and meet everyone else over on the Discord 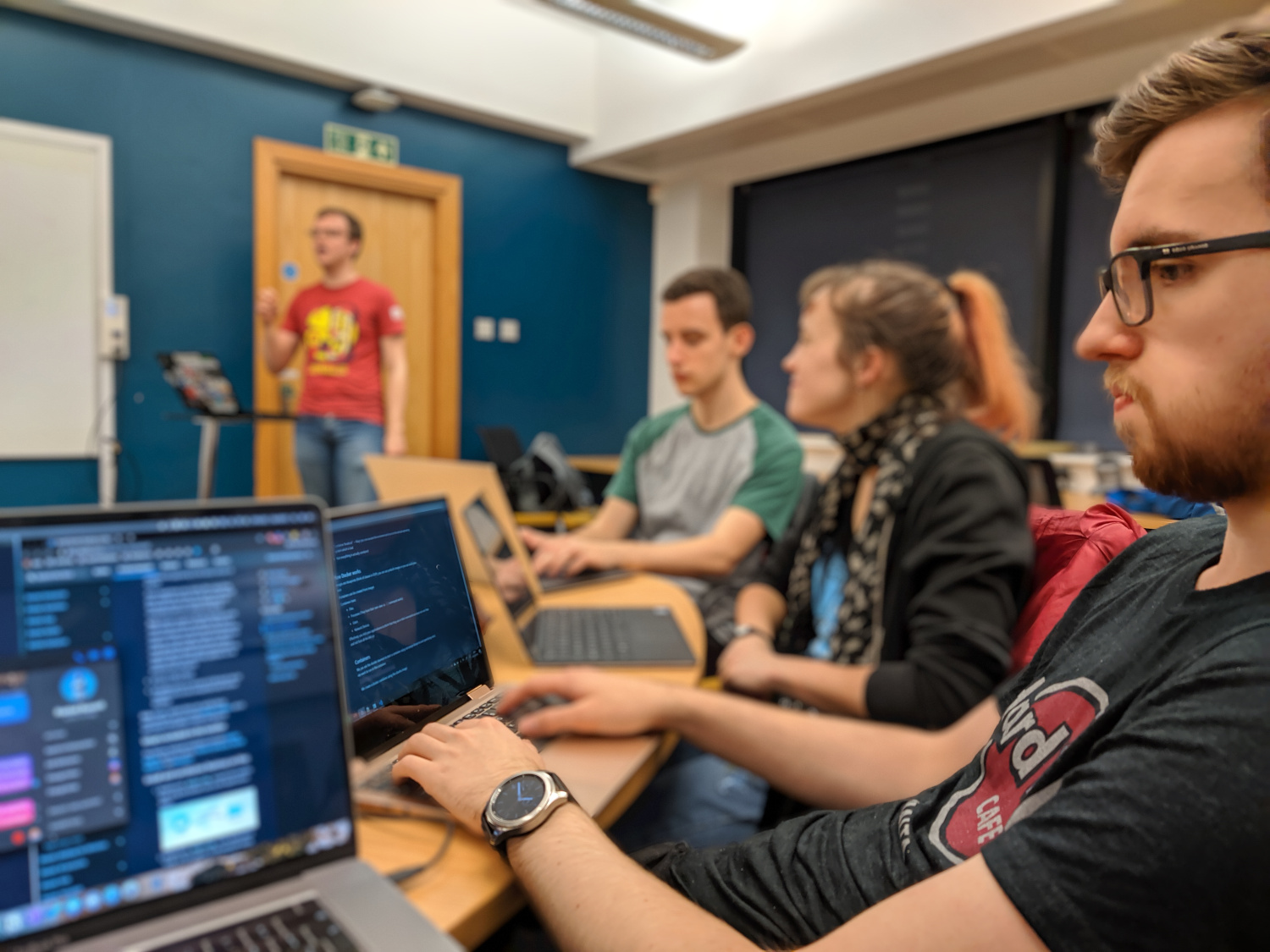 November has been another successful (and busy) month for CSS. We have started Developer Student Clubs - an exciting new project, and brought our largest event of the year so far - the Qiskit Hackathon.

On Monday 11th November, Justin started Developer Student Clubs at the University of Birmingham. DSC is a worldwide initiative led by Google and the idea is to link theory we learn at university with practical skills which are useful in the real world. Throughout the year, we will bring workshops, talks, mini-hackathons and anything else you would like from us.

Justin and Will kicked off the series of workshops with an introduction to Git, the most popular version control system used in industry. We covered everything from the first commit, up to resolving merge conflicts. There was even a practical task where the attendees signed a guestbook by forking a repository and making a pull request!

The second workshop focused on Docker, a fantastic tool which helps manage software deployment using containers. Justin covered all of the basics from what containers do, and how to run them. We also learned how to build our own images and then played around with Katacoda tutorials.

We are always looking for suggestions of what workshops we should run next. Please do get in touch with us/Justin if you have any ideas on what skills you would like to find out more about.

Kainos is one of our longest partner sponsors and on November 6th, 30 students visited their offices to gain an insight into software engineering in industry. The evening started with a few drinks and networking in their offices at Alpha Tower in the centre of Birmingham, followed by a short talk on Agile development with one of the scrum-masters working at Kainos. There was a quick exercise comparing the Waterfall and Agile techniques, which involved making 50 blue squares.

We then had the opportunity to split up into teams of 6 and complete two team competitions. The first game was an escape room. Using problem teamwork and solving skills, one team (which I happen to be a part of) managed to complete it in the shortest time with 6 minutes left and no penalties. The other team task was a round of Keep Talking and Nobody Explodes - a fun video game (intended for VR) where one person is able to see a bomb on the screen with multiple panels, and the rest of the team are armed with defusal guides which give instructions on how to defuse the bomb.

In the down time between the games, there was the perfect opportunity to have some pizza, kindly provided by Kainos. We were also able to chat with the current employees and find out more about what it’s like to work and travel with Kainos, as well as finding out more about their industrial placements and graduate schemes - all while enjoying a game of pool on the office’s pool table.

Thank you to Kainos for hosting this evening at your offices and many students found it a useful and worthwhile experience.

This month we held our largest event so far. We worked with the Qiskit team at IBM to bring a series of sessions consisting of two workshop lectures, and a hackathon. Qiskit is an open-source quantum computing framework with tools for developing quantum programs and running them on simulated prototype quantum computers.

The first session we ran was a lecture given by Dr. Miriam Backens. They gave an introduction on what quantum computing is all about and outlined the basic theory in what makes quantum computers work. The second session was a workshop, hosted by our Qiskit volunteers, focusing on setting up the Qiskit environment in preparation for the hackathon.

The final session was a 9 hour hackathon, during which we provided breakfast, lunch and dinner. Dinner was, as usual, the regular serving of pizza. The judges were impressed with the many different projects all of the teams presented at the end of the hackathon, but they were most impressed the two joint winning teams.

The first winning team created Acid Rain, a project which is a game designed for the Pew Pew (a microcontroller board similar to the Raspberry Pi). They created a simple game where the player moves left or right to avoid collisions with falling acid rain. To introduce some ‘quantumness’ to their project, the starting position of the rain is generated using qubits and there is quantum tunnelling to determine if the player dies if they collide with the rain.

CSS also got involved with many other events this month, including attending AstonHack 2019 run by our friends at Aston University, travelling all the way to Durham for DurHack 2019, partaking Societies’ Night at the Guild of Students, and attending an Internet of Things workshop with Startup Society.

A shout-out also goes to Tom Goodman, our current secretary and president of the society in the previous 3 years. He won an award as the Tech Rising Star of the Year at the Silicon Canal Tech Awards at Bierkeller on Broad Street last Thursday. Tom has made many achievements from his contributions to CSS, HackTheMidlands and countless other groups around the university and the wider community. Congratulations Tom!

Coming Up in December

The Computer Science community has a few more events throughout the next week and a half before the end of the Autumn semester.

The School of Computer Science has the annual Christmas Lights switch on this Wednesday (tomorrow) in the Atrium at 1pm. All are welcome to come together to witness Mark Lee top the tree with Tux, the Linux penguin, while enjoying mince pies, mulled wine and a few Christmas carols.

CSS is running the first Board Games Night in conjunction with the School of Computer Science this Thursday 6th December at 6pm in the Atrium. All are invited to join in around the table to play many classic games, including Exploding Kittens, Werewolf, and loads more. Please bring your own too, the more the merrier!

Finally, we are looking forward to our annual Christmas Meal, at the S’Oak this Friday. While sign-ups are now closed for this event, we are expecting almost 90 members to join us for a festive meal this weekend.

Thank You for reading,